A few years ago I picked up a series of fantasy books called A Song of Ice & Fire, by author George R. R. Martin. The first book is titled A Game of Thrones, and I absolutely fell in love with the series, which has four other titles in its series, and HBO is currently working on a full series of which the first season will be based on the first novel. I've not been this excited about a t.v. series since the Battlestar Galactica series came out on SyFy!


I first discovered the story while browsing a role playing guide for the game based on the books. I was researching various fantasy RPG manuals for some of my fantasy writing, and I really enjoyed the content of it, so I looked for the books, and I have been hooked since. 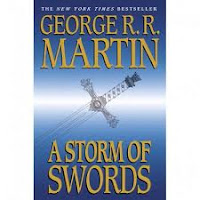 Other than this series, I have been following Gail Z. Martin's Necromancer series, which is very good, and I have been a fan of R.A. Salvatore's Drizzt, from the Forgotten Realms RPG world. Nothing against Salvatore, but the Drizzt books are very fantasy with much to do of magic, elves, dwaves, and orcs...it is fantasy in every sense. Gails' books are very well written too, great characters, world building, a little more adult than Salvatore's, and with a bit of a vampire and werewolf twist. There great authors, and their stories are worth giving it a try, but I have to say that George's series takes the cakes.


The books are told from various character point of view, rather than the common chapter one, two....and sometimes it jumps a round a little bit, because by telling the story in chapters from the point of view of the characters the timeline overlaps, rewinds, fast forwards a bit. No problems keeping up though, it isn't at all as confusing as it sounds. It actually makes for a very interesting read.

Another positive point of the series is that while it is a fantasy book, in a fantasy land, and there are some paranormal and magical elements of the story, it is largely based on the feudal European history and folklore, it isn't bogged down by a bunch of elvs, dwarves, and mighty sorcerors. What it does have is great court intrigue, characters who pop out at you, and a vast and rich world of many wonders, mysteries, and woes.


The stories take place largely in a land called Westeros, which was once a land of Seven Kingdoms. It was a feudal land with various kings, lords, all sharing common cultural traits and unique aspects. The ruling class are the noble Houses. Far off to the east on an island kingdom there ruled the House Targaryen, and they unlike any others, bred and commanded mighty dragons. They conquered the Seven Kingdoms and ruled fr many generations.  The Targaryens grew decadent and corrupt, their dragons died out, and their power waned. A tragic series of events unfolded which led to a coalition of Houses to untie against them and retake their lands. The first book, A Game of Thrones, weaves many plots to that which the title sums the story- a great power struggle for the future of all the land as the kingdom is threatened to be fractured. There are numerous plots of betrayal, secrecy, court intrigue, and of the supernatural. I don't wish to divulge to much, in case one decides to give this book and the series a go, because in reading things unfold and plots thicken to a degree that it is such an  entertaining treat to have spoiled here.

They are an amazing series with such great characters and intricate plots, that I would compare it to the works of Tolkien, to a degree. The way it has been written with such richness and mirroring of feudal European culture and folklore, but without the heavy fantasy elements and difficult to pronounce names and languages that even those who have never card for fantasy may well find a jewel here. It truly wouldn't surprise me if these books found themselves in literary studies in high school or college programs one day, as have been Tolkiens'.


Here are a few links to the HBO teaser trailer for the upcoming series. I would highly recommend reading the first book before watching the first season when it comes out, you will appreciate the HBO series all the more:

And this link offers a video on HBO with commentary on the series: HBO: WINTER IS COMING

The next book of the series: A Dance With Dragons is supposed to be out sometime this fall, and I eagerly await it! Here is an image of its cover: 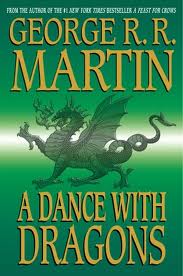 The Golden Rule: Please be kind and respectful to one another. Leave drama off the blog.

1. Please avoid using all CAPS.
2. Comment moderation is on - We will approve ASAP.

Personal Attacks on other Commenters & Bloggers - Whether Direct or Indirect, Racist, Misogynistic and Homophobic comments will not be published.

Simply put: Be nice. Be respectful. Have fun.

Thank you for visiting and commenting!